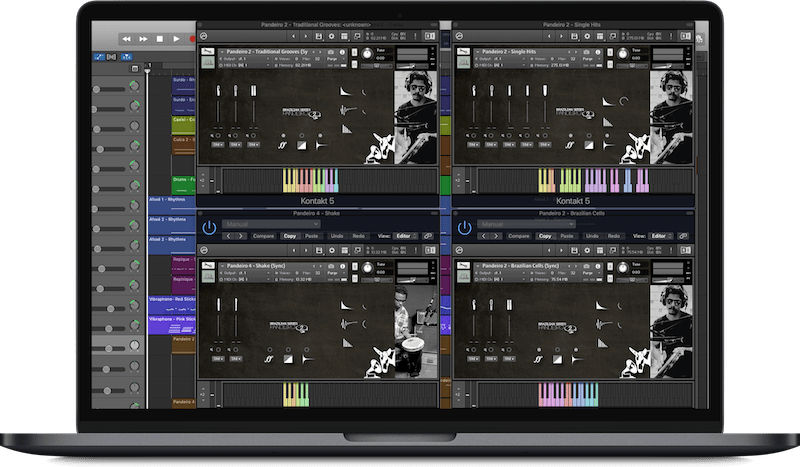 Dance with the Music

In the new session we have a performance of the percussion Guru, Robson Batata, bringing an extensive variation of rhythms and grooves, in addition to modern rhythmic cells that allow more versatility use for the Pandeiro.

In this video we’ll show you the sound of the library. We will also see some features and and how to use them.

Listen the Sounds of Pandeiro 2

Please Note: The FULL version of Kontakt 5.6 or above is required (Not for Kontakt Player)

In the new session we have the performance of the percussion Guru, Robson Batata, bringing an extensive variation of rhythms and grooves, in addition to modern rhythmic cells that allow more versatility of use for the Pandeiro. There are 6 .nki files with groups of cells distributed at 3 different bpm. They all have fixed time and sync. In addition to the Robson session, we have another performance previously recorded by the great musicians, Marcos Nascimento and Paulo Gomes. Altogether we have 14 different .nki rhythms files (6 instruments) and more than 160 loops, along with 5 Pandeiros in Single Hits.

“SOUNDS GREAT! SOUNDS AUTHENTIC! I am using a Cuica for a remix of a song and it definitely brought out the life of the song! Loved it!”

“This is a nice, well-played kit with considerable nuance. I compared this with XLN’s Addictive Drums Jazz Brushes, and Muletone is so much more subtle and real.”

“…This is really helpful if you want to spice up your compositions with some shakerish elements… Does what it offers very well. A cool opposite towards all that boomish wacky epic percussion stuff”

“Great Drum Tool! Both excellent sounds and patterns for brazilian type of songs.”

“I really do love what you make, the instruments sound terrific! And I appreciate the customer support. “

“Really natural sounding Brazilian percussion. I bought this to do some dance/club music in the style of Buraka Sound System”